Now that I have your attention with my intentionally confrontational, click-baity post title…

Last month (May 2020), my library reopened our book returns in preparation for limited reintroduction of material circulation in our community. The course of the pandemic in our service area was on a trend that indicated it would be safe to do so. The best data we have suggests we need to let returned materials sit for 72 hours before processing them back into the collection, onto the shelves, and into patrons’ hands.

Which is why a few of our branches have giant piles of books dumped on the floor: 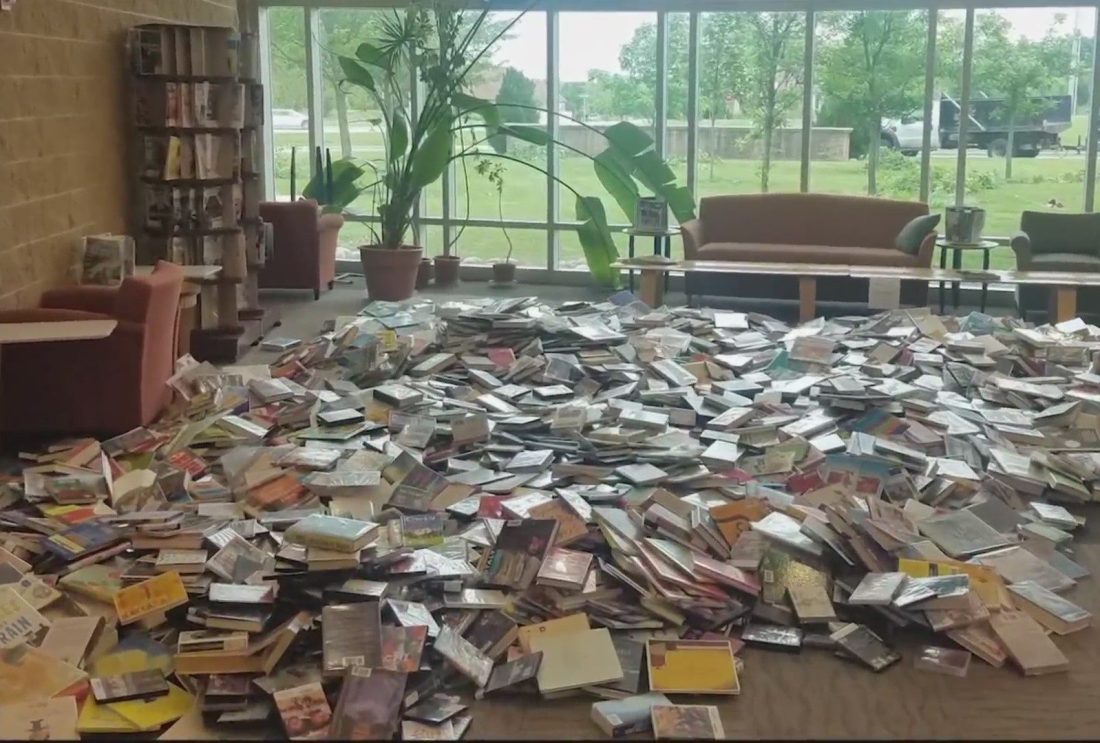 Images like this one were presented in the media as my library reopened our book returns. It caused a minor furor online: people were offended we would treat books so callously. There were outraged comments on Twitter. Even the article this image is taken from can’t seem to avoid a slightly judgmental tone:

END_OF_DOCUMENT_TOKEN_TO_BE_REPLACED

I’m so bored by this question. Let’s talk instead about some things Amazon can’t do:

Can libraries compete with Amazon? This isn’t a legitimate question. If you think Amazon is competition for libraries, then you fundamentally don’t understand what libraries do.

The truth is this:

Amazon can’t compete with us.

A couple of years ago, I had a conversation with a gentleman who insisted that public libraries are going to disappear soon. He voiced the standard arguments about how everything is online now, and how ebooks are going to replace print entirely. His conclusion: libraries are irrelevant in the modern digital age.

Like so many people who take this position, this gentleman personally loves libraries and sees their inevitable passing as a loss to society. It makes him sad to think that there won’t be any more neighborhood libraries (even though he freely admits that it’s been years since he last set foot in his local library).

Of course, I spoke up to correct him. The stats make it very clear that libraries are as relevant to their communities as ever. Public library usage has actually increased with the advent of the digital information age, increased yet more during the recent economic crisis, and popular approval ratings are as high as they’ve ever been and holding steady. I shared all these stats with him. I shared multiple calculations of the economic impact of libraries and the ROI for every tax dollar invested—libraries are the single best public investment most communities can make. I talked about how libraries bolster and expand educational opportunities for kids and adults, citizens and immigrants, and the illiterate. I talked about how libraries can function as neutral gathering places during times of community upheaval. I talked about the library’s role in upholding the freedom of information and expression in our society. I talked about our computer labs and maker spaces and coding sessions and 3D printers and recording studios, our creative writing groups, our book groups, and our art spaces. I talked about our public programming and community discussion forums.

It was so clear to me that this gentleman would be happy to know that libraries are doing very well, adapting more-or-less adeptly to changing circumstances as they’ve always done, and they remain well-used and beloved by their communities.

That’s not what happened.

END_OF_DOCUMENT_TOKEN_TO_BE_REPLACED

A friend of mine posted this article on Twitter a couple days ago (via the New York Public Library):

What Makes Great Detective Fiction, According to T. S. Eliot
by Paul Grimstad (posted by The New Yorker, February 2, 2016)

I love knowing that no less a luminary than T. S. Eliot was a passionate advocate of early detective fiction. But more illuminating is this glimpse into historic perceptions of genre fiction:

END_OF_DOCUMENT_TOKEN_TO_BE_REPLACED

In his book, Part of Our Lives: A People’s History of the American Public Library, Dr. Wiegand challenges the traditional theory that public libraries are institutions which promote an informed democracy. He correctly points out that it’s “hard to prove that American public libraries are essential to democracy.” I’m certain it’s difficult, just as it’s difficult to prove many of the intangible benefits that libraries present their patrons.

Public libraries were conceptualized in large part to provide citizens access to information and “useful knowledge” which would help them to become more informed voters and civic actors. This theoretical framework is a political version of Ben Franklin’s ideal of the “self-made man”.

But historical data of public library usage makes it abundantly clear that very few people use their library this way. The maintenance of an informed democracy via access to “useful knowledge” isn’t something our patrons are all that interested in.

So it’s appropriate and useful to question this orthodoxy.

END_OF_DOCUMENT_TOKEN_TO_BE_REPLACED

I recently read the book, Part of Our Lives: A People’s History of the American Public Library by Wayne A. Wiegand. Rather than write a typical review of it, I want to share a letter that I sent the author.

(TL;DR version: This book is wonderful and every public librarian and public library user should read it. I think it’s important.)

I’d like to thank you for writing Part of Our Lives: A People’s History of the American Public Library. Before I proceed to explain why I want to thank you, I need to spend some time voicing a complaint about something you wrote in your introduction. Bear with me—the extent of my gratitude for your work won’t be clear without this context.

END_OF_DOCUMENT_TOKEN_TO_BE_REPLACED

On the last day of the KLA/MLA joint conference last week, I attended a session titled “Why We Need Diverse Books.” I believe the #WeNeedDiverseBooks initiative is one of the most important social movements going on right now. I believe diversity is the most important frontier for collection development in libraries.

The session presenters recommended a variety of publishers who are good sources of diverse titles and gave examples of successful diversity programming they had done at their own libraries. For me, the most interesting point raised was the need for foreign language titles in a diverse collection. Language is an essential facet of cultural diversity, and yet our diversity collections are still predominantly written in English. A truly diverse collection which serves a truly diverse community should have resources in a multiplicity of languages. Too often, this gets overlooked in collection development efforts. I think this is a point well-made.

I walked out of this session asking myself another question which sometimes gets neglected in our discussions about diverse books:

How do we get white dudes to start reading diverse books?

END_OF_DOCUMENT_TOKEN_TO_BE_REPLACED

I debated for several weeks about writing this post. Some of what I want to talk about I already discussed in my post, The Pain of Bad Reference Interactions. I think there’s more to say, though.

My concern is that I have some strong criticisms of the reference interactions I’ve had with some public libraries in the United States. I use no names and I leave out all identifying details—but it’s still possible that some of these libraries, or even some of their librarians, will be able to recognize themselves if they read this.

I have no desire to shame anyone with this post. I find online public shaming culture abhorrent and I refuse to participate in it.

I believe that criticism is necessary for improvement. I offer all criticisms in the sincere hope that it will help us all to serve our communities even better than we already do, and in my desire to help define the best path forward for public libraries in the Digital Information Age.

END_OF_DOCUMENT_TOKEN_TO_BE_REPLACED

People love to ask the question, “Why go to the library when you can just Google everything?” In answer, we tend to fall back on some version of Neil Gaiman’s famous quote:

We talk about the authority of librarians, our ability to sift through the vast oceans of data with a far better eye toward quality than any search engine can match. We talk about the personalization of the interaction—librarians can recognize not just the right answer, but the answer that’s right for you.

Often, people don’t know how to ask their question. Google is stuck with whatever you enter—if you ask your question the wrong way then you only get results that aren’t what you need, and you’re left to your own devices to try and figure out what went wrong. A librarian can figure out what you really meant and guide your search, to bring you information that’s actually useful in a much more intuitive and rewarding way.

I agree with all of the above. Librarians can serve people’s information needs in ways that Google, or any other online search engine, simply can’t.

Which is why it especially pains me every time I have a bad reference interaction.

END_OF_DOCUMENT_TOKEN_TO_BE_REPLACED

Libraries: a relic of the past or essential in the digital age? Tweet us @KCURUpToDate @kcur

Prof. Palfrey offers an optimistic and robust vision for the future of libraries, but even he frames the discussion in a way that implicitly fuels the fire for those who question their relevance.

I’ve spent a lot of time looking at the data and I have to say—I can’t understand how the relevance of libraries has come into question in the first place. It bothers me that we’ve allowed this question to define the discussion about their future. I can’t think of any other public or civic institution or service that can boast the kind of numbers that libraries do. I tweet-stormed some of the most powerful: